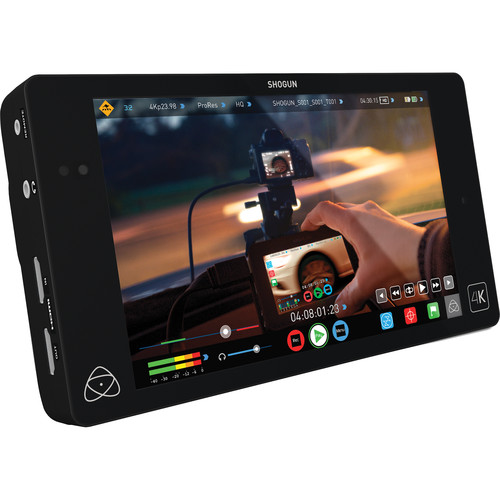 As a monitor, the Shogun features a 7″ IPS capacitive touchscreen display with resolution of 1920 x 1200. It is Rec. 709 color calibrated and supports multi-frequency operation (48/50/60 Hz) for monitoring of a variety of input frame rates. An SDI loop output is available for passing the signal to an additional monitor. As an added convenience, 4K signals can be internally down-converted and output in 1080p at the same frame rate.

The Shogun adds several new features over previous Atomos models, including custom 3D LUT support, Genlock In for multi-camera syncing, and improved audio handling with an included LEMO breakout cable for XLR audio. There are also a variety of onscreen tools to help you set up your shots, including a full waveform monitor, RGB parade display, vectorscope, focus peaking, and other framing, focus, and exposure assisting tools.